Why the Bailout Plan is Destined to Fail 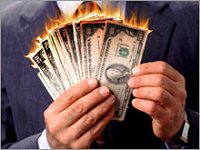 I tend to think of myself as an optimist, but when it comes to the government’s $700 billion bailout plan, I think it’s destined to fail for one simple reason:  The money is going to the same people who got us into this mess in the first place!  Does anyone really feel like they’ll be any more responsible now that they’re spending taxpayer’s dollars rather than investor’s dollars?   They got a financial get out of jail free card rather than having to take responsibility for their actions.  So, what’s the lesson learned?  Make bad decisions and the government will bail you out.  This morning, I saw an interesting article in the Washington Times that highlights just how little these guys have changed their behavior since the bailout plan went into effect.  Some top executives of AIG spent $440,000 on a post-bailout retreat at a posh resort – including spending $25,000 on spa services.   Your tax dollars hard at work!  If these guys were serious about being fiscally responsible, they’d be meeting at a Hampton Inn by the airport instead of a high end resort.

So, what would I do if I were the man in the fur coat?  I’d lend the money to those companies and financial institutions which have made good, solid business decisions.  Encourage those businesses to continue on their positive course and capture market share from the companies who haven’t been fiscally responsible.  We’ll end up with a group of solid winners and the losers will cease to exist.   The free market system can work, but we need to focus incentives on businesses that do things right rather than rewarding those who don’t.

Sunny afternoon liftoff from Washington, DC (Manassas) back home to Florida for the holiday! ☀️✈️ https://t.co/32hEfaCNNF

Crazy evening… Aircraft ahead of me crashed as they departed (engine trouble) while I was inbound for landing. For… https://t.co/sFLHqOty5S

Afternoon trek from Florida to Washington DC, three hours of flight time. Learning to use my new Insta360 One RS c… https://t.co/0ggtsEDcXC