Alligator and an Airplane – Going Viral on Social Media 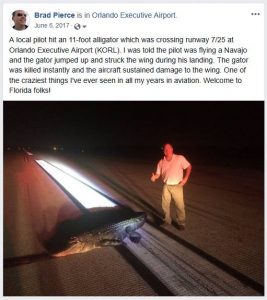 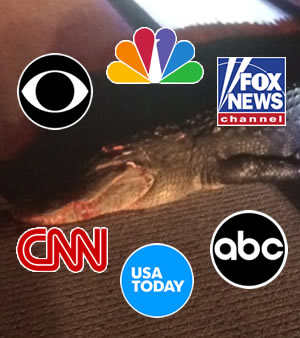 I’ve often wondered what it’s like to have a post go viral on social media.  Literally, overnight.  Over two million people viewed my post in a matter of a few short days.  It happened to me when I least expected it, a simple photo with a short narrative, and BAM!  Viral happened.  Here’s a behind-the-scenes look at experiencing it first hand…

A good friend of mine texted me an interesting photo which had recently been taken at Orlando Executive Airport (KORL) overnight.  It was an unusual shot; a private airplane landed and unexpectedly collided with an alligator on the runway.  The 11-foot long, 500 lb alligator was instantly killed.  The pilot posed for a quick photo with a thumbs up next to the deceased alligator following this unfortunate incident.

I’ve flown for the past 22 years based in Florida and had never come across any wildlife on a runway aside from small birds – and certainly never an alligator.  I thought to myself, this is really wild; I’d love to share this with my pilot buddies online.  My friend gave me permission to post it so I attached the picture along with a quick write-up, “A local pilot hit an 11-foot alligator which was crossing runway 7/25 at Orlando Executive Airport (KORL). I was told the pilot was flying a Navajo and the gator jumped up and struck the wing during his landing. The gator was killed instantly and the aircraft sustained damage to the wing. One of the craziest things I’ve ever seen in all my years in aviation. Welcome to Florida, folks!”

Little did I know, my day was about to get a whole lot crazier than simply posting this photo.  In an instant, social media was the last thing on my mind.  A crazed gunman stormed the building next door to my office and took the lives of several of his former co-workers.  I was now in crisis mode, tending to the needs of my staff members and juggling interactions with police, rescue personnel and media outlets.  It was a horrible day and needless to say, checking my social media “likes” and “shares” wasn’t even remotely considered.  While chaos ensued in my physical world, unbeknownst to me, my alligator post was going viral online.

At 8:00am the next morning, my doorbell rang right as I was waking up.  It had been a long night with all that occurred at my office the prior day.  I walked to the door and opened it, only wearing a white tee shirt and a pair of boxers.  Standing in front of me was a TV reporter and a gigantic television camera, lights blaring springing into action.  I thought to myself, you’ve got to be kidding me, they really showed up at my house?  The reporter immediately asked something along the lines of, “Can you share your thoughts on this crazy story?”  I quickly replied with the same response I’d given to dozens of reporters the day before, I conveyed my thoughts and prayers for the victims and their families.  He stood there looking confused and asked, “What in the world are you talking about?”  I responded, “The shooting.”  He had a very surprised look on his face as he stood silent for a moment.  Another moment of confusion ensued as we both tried to quickly process what in the world each other was thinking.  He then explained that he didn’t know which shooting I was talking about and clarified that he was asking about my social media post which had gone viral.  Now I was really confused.  He followed up, “You know, the one about the airplane hitting the alligator.”

Now that our bad comedy skit had played out and we were on the same page, it was time to hop online to discover what happened with my alligator post.  I sat there with a look of awe and amazement as the likes and share counters climbed by the second.  The comments started flowing in one after the next.  I soon realized I needed to turn off the notifications on my phone as it was buzzing and dinging non-stop alerting me of activity.  While I was still in shock a reporter would track me down at my home for such a silly story, upon seeing all this craziness I agreed to do a brief on-camera interview – with a few conditions… I needed to put on pants.  And a real shirt.  And a take a quick shower.  And all that impromptu “knock on your door and catch your candid reaction” footage would never see the light of day!

The hours that followed were filled with amazement as I continued watching this wild viral social media hit unfold.  As the likes/shares continued climbing, my direct instant message box began to overflow with media inquires.  Literally dozens, which soon swelled to hundreds.  My office phone was inundated with calls from reporters.  Several of them even tracked down my e-mail address for a more direct shot at my inbox.  Soon I received a call from the Orlando Executive Airport FBO, a rather confused staff member said, “Uhhhh, Mr. Pierce… there’s a TV news crew here looking for you, what should I tell them?”  It was pure communication chaos coming at me from every direction.  After the few thoughtful and personally written replies, I realized I couldn’t keep up.  It was time for a form letter response which I wrote in record time.  I basically outlined what happened with answers to the common questions I’d been receiving and hit copy and paste hundreds of times.

Here’s the strangest part, friend requests started popping up.  At first just a small handful.  Then a dozen, two dozen, soon there were hundreds.  At some point along the way, it topped 1,000.  Who in the world were these people and why in the world would someone send me a friend request based upon seeing a social media post of mine?  I didn’t want to be rude (I’m sure there were some very nice people), but if I had accepted all of them, my social media feeds would have been completely littered with posts from people who I don’t even know.  That reminds me, if you sent me a legitimate request during that time, you may want to resend it, there’s a high chance it got nixed along with those from my other thousand plus “new friends.”

The days ahead drew even more attention, the story was no longer confined to our borders, there were television and newspaper articles from Europe, Asia, Russia, Africa, Australia and beyond – worldwide media attention – hundreds and hundreds of outlets all reporting on my post.  I scoured Google News and discovered articles in German, French, Russian, Arabic and virtually every other language.  All the media giants featured it prominently – Fox News, CNN, NBC, ABC, CBS, USA Today – you name it, virtually every publication and news station covered it – including hundreds of local affiliate stations.  Perhaps the most entertaining coverage was done by a well known tabloid with the title, “Giant alligator killed trying to EAT plane as it lands.”  I never in a million years would have guessed I’d end up in such a publication, but the sheer craziness of their headline certainly gave me a good laugh.

It was exciting to read all the various new stories as they popped up in my new feed alert.  I found it interesting even with a basic story like mine how often the facts weren’t always presented accurately.  In more incidences that I can count, I was inaccurately cited as being the pilot of the aircraft.  I was also improperly credited as being the photographer on the scene (which I made clear was not the case).  The coverage inaccuracies led to many calls from concerned friends and business associates.  Even to this day, I occasionally have people in conversations mention, “that time you hit the alligator with your airplane.”  I’m confident the news media and reporters weren’t intentionally trying to misrepresent the facts; they were all just racing to get the story out quickly trying to beat hundreds of competing outlets who were doing the same.

Fast forward to a few days later… it all ended.  Dead stop.  My viral social media post had died.  People’s attention had shifted to watching the next dancing baby or funny cat video as my fifteen minutes of online fame expired.  The likes waned, the shares trickled and people went on with their daily lives.  It was as though someone flipped a light switch, literally bringing all post activity to a screeching halt.

Overall, my alligator on the runway post had been liked/shared thousands of times reaching more than 2 million people.  It was a wild, crazy, insightful ride seeing first hand how a viral post grows in the world of social media.  I’m still fascinated by how incredibly cool of an experience it was to watch it play out live as it happened.  Landings in Orlando will never be the same… New short-final checklist item:  Confirm no alligators on the runway.