A Perfect Day of Flying 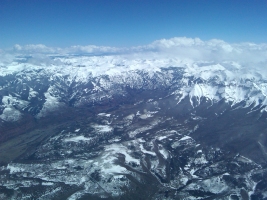 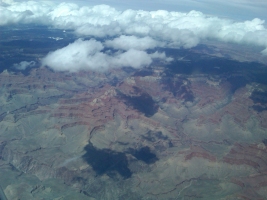 I truly believe that every day I fly my Cirrus Aircraft is a perfect day.  Before I go into the details of my most recent adventure, I’ll start out by sharing the flights that got me to one of the most perfect days of flying ever.

I started in Orlando on Sunday afternoon and headed towards Mississippi.  It was a nice sunny day in Orlando when I left, but quickly turned gray as I approached the Florida border.  A line of storms was pushing through the area which later in the week would become the chaotic storm to hit the Sun ‘n Fun event in Lakeland.  Using the onboard XM weather radar and data feeds on the Garmin Perspective unit, I was able to get a clear view of the challenge ahead.  I considered numerous alternatives to my destination and was able to plot a course that would keep me out of harms way.  Just prior to returning to Orlando on my previous trip, I had been flying extensively throughout Texas so my bird was quite dirty.  I hoped that perhaps I’d get a quick bath along the way to clean it up with some light rain… that didn’t happen though which was actually a very good thing.  I managed to use the vast number of onboard resources on the Garmin system to successfully navigate around the inclement weather and arrive at my destination in Mississippi without so much as a drop of rain hitting the windscreen.  The next leg of my flight took me to the Dallas/Ft. Worth area for a smooth night landing and a safe taxi to the FBO with the assistance of the SafeTaxi system as well as the onboard Enhanced Vision System (EVS) that literally allows you to see in the dark.  The following day took me to Albuquerque, New Mexico.  It was a thrill to be given a landing clearance at 10,000 feet as I passed over the mountain ridge just prior to a steep approach into the airport.  I continued towards Phoenix, Arizona for a conference I was chairing which went off without a hitch.  Upon leaving Phoenix several days later, my final leg westbound was to San Diego, California.  I recently saw a special on TV noting that San Diego is one of the most difficult airports to land at in the United States so I was certainly prepared for an A-game approach.  This time I was given a landing clearance at 12,000 feet… the interesting part is the airport elevation is only 17 feet!  It was a busy, fast decent integrating with the airline traffic, but I was happy to be flying an aircraft that could handle this sort of challenge without a moment of hesitation.  I even received instructions to slow down by final approach as I was gaining on a 737 approaching the field, always a fun radio call for a small aircraft.  As a side note, the control tower allowed me to sidestep the approach for wake turbulence which I appreciated since it kept me in my safety comfort zone.  It continually amazes me how this aircraft is capable of landing at very small backwoods fields, yet can equally hold its own with the “big boys” and not slow down traffic at major international airports.  I was on the ball, ready for a challenging approach… which I kept waiting for… and waiting for… then my wheels made the soft screech onto the runway.  The challenge simply never came to fruition.  The airport approach was quite honestly a piece of cake.  I realize it was much more than pilot skill (although for my own ego purposes, I’d like to think that wasn’t the case).  The reality however is that the Cirrus is just so intuitive to fly and the information presented on the Garmin Perspective system is so solid, that flying an approach which is described as a challenging one is actually quite simple and straightforward.  I arrived safely after flying completely across the country and was looking forward to enjoying the warm Southern California weather.

For many pilots, just simply the opportunity to fly across the country in a small aircraft would be an amazing experience (and it was!).  In reality, this was only part of the adventure and I hadn’t even begun to experience the magic of my “perfect day of flying” quite yet.  After visiting the city, I took the quick car ride from downtown back over to San Diego International Airport.  After completing my preflight, I embarked upon the next leg of my journey which would ultimately lead to this post.  There was a slight delay departing due to the airplane congestion leaving San Diego with only one runway, but I was quite happy as I rolled past the over packed airliners lined up on the alternate taxiway to begin my trip.  I spent my time waiting in line for a departure just like those airliners, but I knew that was the only line I’d be standing in that day since I had the freedom of owning a Cirrus under my wing.  My departure was smooth and took me up the coast of Southern California which was a beautiful sight.  Soon, I was passing over the first mountain range and into Arizona which was amazing to see depicted perfectly on my synthetic vision display.  I donned my oxygen and soon continued my climb to 17,000 feet to take advantage of strong tailwinds.  Like most pilots flying out west, the usual concern is rising terrain.  In this case however, already being high above it all, my eyes were focused on the descending terrain ahead as I flew directly towards the Grand Canyon.  I finally approached the rim of what is truly one of the most magnificent sights to view from the sky.  I coasted smoothly along as I mentally absorbed the work of art known as the Grand Canyon below (I was on an IFR flight plan to ensure I wouldn’t break any overflight restrictions).  It was truly an amazing sight that I encourage all pilots of see at least once during their flying career.  While the sight of the Grand Canyon was incredible, my eyes were now once again focused on the in-flight resources to get a better picture of the weather that I’d encounter further along on my journey.  I realized there was a slight layer of clouds at 17,000 feet so opted to climb up to 19,000 feet.  My Turbo Cirrus climbed effortlessly to gain an additional 2,000 feet.  Just when I thought this day of flying couldn’t get any better, I approached the Rocky Mountains.  Wow, this sight was the equivalent of viewing the most picturesque postcard I’ve ever seen and multiplying it by a thousand.   I looked through relevant weather information I had been taught during my mountain flying instruction to ensure that I’d be well clear of wind currents which could cause an uneasy ride.  As another side note, I highly recommend taking a mountain flying class from a qualified instructor prior to flying in this sort of environment which will make you a much better and safer pilot.  Confident the journey could be completed safely, I continued soaring high above the majestic snow covered Rockies.  My face was beginning to practically hurt, not from the oxygen mask, but rather from the huge smile stretching from cheek to cheek which nothing in the world could have wiped away at that moment.  Soon, my journey would conclude with a smooth landing at Centennial Airport in Denver, Colorado.  This truly was an absolutely a perfect day of flying!

I spoke with my father later that day and he remarked how difficult it is to be out on the road traveling for business.  I agreed that I’ve visited way too many hotels in the recent days and weeks, but that the actual traveling part was even more pleasurable than ever.  After all, my day was hard to beat at any price.  In a single day, I had soared above the coastline of Southern California, flown over multiple states with varying terrain, had the privilege of seeing the incredible sight of the Grand Canyon from the air, and soared over snow covered mountain tops in Utah and Colorado.  The entire trip took only roughly three hours.  This was accomplished due to the phenomenal performance of my Cirrus Aircraft which safely and quickly allowed me to climb into the flight levels to take advantage of a 62 knot tailwind.

My Cirrus Aircraft has truly has changed every aspect of what I do and who I am as a person.  It’s a phenomenal aircraft that has changed my life in more ways than I could ever express in a lifetime of blog postings.  On this particular day, it led to an amazing adventure filled with memories of an absolute perfect day of flying!