Where in the World is Brad? Look Toward the Skies Above! 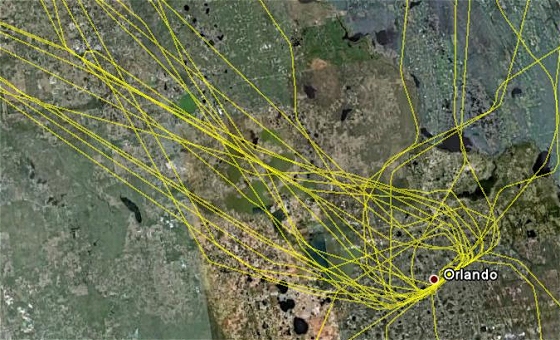 There’s rarely a day that goes by lately where someone doesn’t ask me where I’ve been since they haven’t heard from me lately.  People call, they write, they even stop into my office for a quick chat – yet, I seem to be missing.  Well, the picture above tells the story better than words alone could ever describe – I’ve been flying – EVERYWHERE!  This is the flight tracking map of my flights in my Cirrus SR22 Turbo aircraft over the past few weeks alone into and out of the Orlando area.   Each of the yellow lines is the actual flight path I flew my plane during an approach or departure from the area.  I’ve literally flown dozens of flights to dozens of cities in states throughout the country – from the northern states to the southern islands, from the east coast to the west coast and everywhere in-between.  At a time when many people are sitting on the porch hoping for “better days to come”, I’m out there making things happen trying to brighten the future for our business.  I’ve visited existing customers, prospective customers, trade shows and have attended multiple conferences.  I’ve flown through rain, snow, clouds, haze, icing conditions and fortunately have had plenty of sunshine along the way as well which always brightens my day – literally and figuratively.  I’ve taken off before the crack of dawn to see the sunrise from the air (incredible) and have flown all day long to see the sunset from the air as well (even more incredible).  I’ve flown along a whole lot of coastal areas, passing over oceans, lakes and rivers, glided along above the flatlands and more farmland than I could ever imagine, watched the dense brush of forests pass under the wings, looked out the window at the desolation of desert and ranch land below with no one in sight for hundreds of miles, flown over canyons and amazing rock formations, and have even seen the magnificent sight looking out the window as I flew past snow covered mountain tops and down into valleys.  I’ve had smooth landings that I greased with ease, not-so-smooth landings in much more challenging conditions with gusty winds and wind shear, landings in snow, landings in rain and landings with ice still firmly adhered to the wing tips and other unprotected surfaces from flights in the icy clouds above.  I’ve landed at airports with runway elevations as low as -1.7 feet (yes, that is a negative), and as high as 4,456 feet – the power of the humming engine in my Cirrus SR22 Turbo aircraft handled each of those scenarios flawlessly.  I’ve done more approaches to minimums in low clouds than in my previous 13+ years of flying – sometimes being the lone plane coming into a small field with no control tower, and other times flying a parallel approach into a busy airport with a 767 along side of me gliding through the thick clouds to a smooth and safe landing below.  I’ve flown into small back-woods fields, military bases, islands, small towns, large cities, and into some of the busiest international airports in the country.  Over the past few weeks, I’ve experienced it all – virtually every condition known to flying.  I know I’ve certainly become an even much better pilot because of these experiences.

There’s no doubt I’ve been busy beyond belief, but it’s also been a spectacular journey that’s enabled me to see some of the most beautiful landscape this country has to offer.  And the best part of it all, I’ve been working to generate sales and new opportunities for our business the entire time.  How cool is that?  Those who know me have often heard me refer how much my Cirrus Aircraft has changed my life – truly every aspect of who I am and what I do – this post is undeniable proof of that statement.  While I used to cringe at the through of extensive travel, I now actually look forward to it – after all, getting there and back again safely in the comfort of a world-class aircraft is often the most enjoyable part of the trip.

So, if you’re wondering where in the world I’m at, you now have the key – just look toward the skies above – you’re likely to see me passing overhead, smiling the entire time, as I soar above the incredible landscape below embarking on my next adventure.

as an sr 20 owner - i have a question: where did you get the tracking info for your plane?

Hi Dan! I took this particular image graphic using the free Google Earth software (http://earth.google.com). To get your flights mapped out in Google Earth, simply go to Cirrus Reports (http://www.cirrusreports.com) and sign up for an account which is free as well. Upload all of your data log files from your MFD to the site. You'll be amazed at how much information the Cirrus Reports site can tell you about the operation of your aircraft. Now, for the tracking map part - On the Cirrus Reports site, click on the Flight Log tab at the top of the screen. On the right hand side of the screen you'll see an export button for Google Earth. Press the button and it will allow you to download a file that opens in Google Earth and shows all of your flights. In my case, I'm using the Garmin Perspective system which shows the tracking in 3D, but this works with the Avidyne system as well showing a 2D map. As far as live flight tracking (for individual flights), I personally use Flightwise (http://www.flightwise.com), which was formerly called FBOweb. There are a number of other competing flight tracking services which are great too, but Flightwise offers a low cost method of tracking blocked tail numbers (ours is blocked from public view due to competitive reasons). Feel free to shoot me an e-mail if you have any questions about things working properly for you and I'll be happy to help!

Hi Brad, I am jealous and happy for your clear love affair-I know how that goes! I work for Max-Viz--we designed and manufacture the Enhanced Vision System available for Perspective equipped Cirrus--I was curious if you have that option on your plane and if so, how you like it. ALso interested in any observations and special mention benefits you have experienced. Lou

Hi Lou! It's definitely a love affair with both the magic of flight and with my new Turbo Cirrus which is absolutely incredible. My Cirrus Perspective is equipped with the Enhanced Vision System (EVS) which is terrific! To be honest with you, when I acquired the new airplane with the EVS system I thought it was really "cool" and a neat "toy" to show off, but I questioned it's real usefulness. That all changed just a few weeks ago while I was flying with a nervous passenger (my sister) over to San Antonio for a conference at night. There were towers of cloud build-ups scattered around us. We were experiencing a few bumps as we rushing through them so I flipped the MFD to the EVS screen to get a better look at what was ahead. Anyone who's flown in that area of the country at night knows it's absolutely pitch black and you can hardly see beyond the propeller. Instantly, night turned into day and I had a picture perfect view of what laid in our path. I asked ATC for very minor deviations around the build-ups which they quickly granted. A few degrees here, a few degrees there - we didn't experience so much as an ounce of turbulence the rest of the flight - and it was all thanks to the EVS system. Obviously, the biggest benefit of an EVS system is to enhance safety, but in this case, making a nervous flyer comfortable so that they actually enjoyed the flight rather than fearing it was worth its weight in gold. Fast forward a few weeks - the EVS system is now a staple in my toolbox for any of my night flights - of which there have been quite a few lately. I simply can't imagine flying at night without it. I love using the split screen moving map display in conjunction with the EVS window for a comprehensive view of what's ahead even when conditions are less than ideal. The terrain awareness functionality is equally as impressive giving you a clear picture of the surrounding area and runway environment coming into a field at night. Great job on developing such a terrific product which adds yet another level of safety to the Cirrus. Lastly, in case you're wondering, yes, it's still very "cool" too :)

Brad, I want to incorporate the SR22 into my second novel. Who should I contact to understand the capabilites on dives, speed, and performance out of a dive and the chute? Jeff