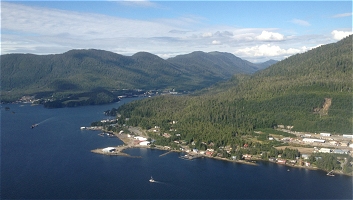 Alaska, the Final Frontier.  For years I’ve dreamed about flying to Alaska, experiencing the scenic beauty of such a magnificent place from high above.  After completing my quest of landing in all 48 continental United States, Alaska was on my radar for places that I wanted to visit in my Cirrus SR22 Turbo Aircraft.  Over the past years, I’ve been speaking with numerous people ranging from casual flyers to business associates to flight instructors who’ve flown to the area.  I’ve also had the opportunity to spend quite a bit of time with several of the real Alaksa pilots from the television series, Flying Wild Alaska, to get even more perspective on the region.  I love flying, I’m a capable and well trained pilot, but flying to Alaska with its’ unforgiving terrain and rapidly shifting weather conditions scared me.  Getting perspectives from a wide group of trusted advisers gave me the confidence I needed to actually make the trip happen.

When I first contemplated visiting Alaska, I figured that I’d head up to Anchorage for a quick weekend visit.  Upon looking at a map and doing some quick flight calculations, I realized that Anchorage was much more than a weekend trip.  Alaska is quite frankly, huge.  Take a look at the comparison map I’ve included below to see the size of the state in comparison to the continental US.  The map is click-able to make it larger. 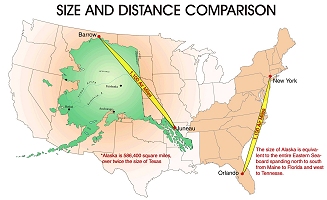 Now that I’d ruled out Anchorage as my intended destination due to distance, further research led to me the small fishing and logging town of Ketchikan, Alaska.  I’d be able to fly directly from the Northwest US and make the trip non-stop in around 3.5 hours with plenty of reserve fuel in case of an unintended diversion.  The next question was when I’d actually make the trip.  I didn’t have a specific time frame in mind, other than knowing that I’d like to visit in the summer when weather would most likely be favorable.  Given that I travel throughout the US often, I knew I’d be in the Northwest several times and would just wait for the perfect opportunity to present itself.  One thing that’s resonated throughout all my discussions with my flying mentors and advisers regarding flying in Alaska is that patience is a virtue, you can’t be on a specific schedule when attempting such a feat.  I found myself in Seattle one weekend and the weather looked terrific.  I was within range, the forecast was calling for nice weather for the next two days, it was go time.  Upon departing Boeing Field in Seattle, Washington, my Alaskan Flying Adventure had begin.

The flight towards Alaska was breathtaking and magnificent.  There’s no other way to describe it.  For miles and miles in every direction the beauty of the landscape was remarkable.  The mountains and waterways throughout British Columbia are truly a sight to see.  As my aircraft soared through the clear blue sky towards its’ destination, gigantic cruise ships passed below taking passengers to and from the place I was so eager to visit.  The following two pictures were taken during this part of the journey.  As with all images in this post, they’re both click-able to make larger for an even better view. 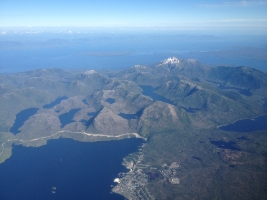 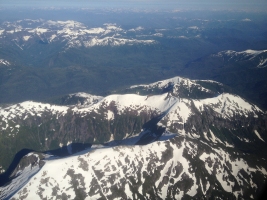 Finally, after three hours in the air, I watched the map on the multi-functional display (MFD) in my airplane as it crossed from Canada into Alaska.  I simply couldn’t be more excited.  My dream of this adventure was becoming a reality.  Sure, it started several hours earlier, but actually seeing the little airplane on the map cross the dotted line signifying entry into the state brought it all to life.  Shortly after entering Alaskan airspace, I began preparing for landing in  Ketchikan.  I was still on high alert knowing that despite the beauty, danger lurked in the mountain winds as I descended closer to the valley.  Fortunately, I’ve been trained well by Rocky Mountain experts in Colorado so feel confident in my mountain flying ability along with a healthy respect for the associated challenges.  Even though the skies were clear blue that day, I had my instrument approach plates ready, I’d studied every detail, I was ready to make a safe landing at my destination.  After circling the small airport island across the waterway from the city of Ketchikan, I descended into the valley and lined up for the runway.  I noticed numerous float planes hundreds of feet below me landing and taking off from the Tongass Narrows waterway which was an interesting sight.  My aircraft’s magic box called out my 500 foot altitude indicator telling me I was moments away from accomplishing landing in my 49th state in the US.  The landing was magnificent, absolutely smooth and perfect just as I’d imagined it would be after such a relaxing and majestic flight.  The following picture was taken on the ground at Ketchikan International Airport (KTN / PAKT) standing in front of my Cirrus Aircraft, N225HL. 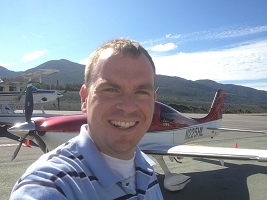 That day and evening were spent exploring Ketchikan and visiting with numerous local customers.  Yes, you read that right, local customers.  My company has over 100,000 customers throughout the country, including several that happen to live in Ketchikan, Alaska.  Whenever I’m traveling, I always make it a point to stop in to local establishments to simply say “thank you” for the business they’ve done with my company.  Needless to say, many of these customers were shocked and surprised.  They figured that they were buying from some faceless corporation with an online site, yet there I was, live and in person, shaking hands and thanking them for their business.  It was nice to meet some new friends and solidify business relationships that aren’t on my normal beaten path.

The scenery throughout the city was just as incredible as what I’d experienced from above.  Trees, mountains, waterways, just the right amount of snowfall on the mountain peaks, every direction shouted out nature, beauty and serenity.  I captured the picture below just before sunset overlooking the Tongrass Narrows waterway which separates Revillagigedo Island (City of Ketchikan) from Gravina Island (Ketchikan Airport).  You’ve probably heard the saying, pictures don’t do it justice, in this case, that couldn’t be more accurate.  This place was simply amazing. 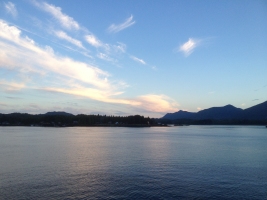 My mini Alaskan flying adventure had come to an end way too soon as the following day wore on into the afternoon.  I still had a meeting to attend in Dallas and given the distance needing to be covered, it was time to leave Alaska behind.  I’d accomplished my goal of landing in yet another state, but I simply didn’t want to leave, despite my necessity to do so.  I checked the weather and determined it was still safe and clear, so departed for the journey back South towards Seattle.

Did I say the weather was clear?  Well, it was clear when I departed, and it was forecast to be clear throughout the flight.  The funny thing about flying in Alaska is how quickly the weather can change.  I’d heard this a dozen times in my discussions with others, but I still didn’t quite “get it” until experiencing it first-hand.  The first two hours of journey were smooth with clear blue skies.  Then, it happened.  Clouds started to roll in, mountains were becoming seas of white, with peaks protruding as a frightful reminder of the rugged conditions below. 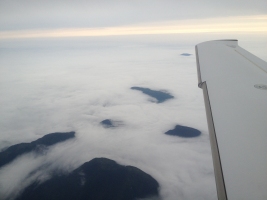 As my Cirrus continued towards Seattle, the clouds began creeping closer and closer until I found my aircraft engulfed in them.  Headwinds increased, slowing down the journey considerably.  Turbulence began occurring, light at first, then progressively more and more aggressively.  Radar coverage was limited, so air traffic control couldn’t do much in the way of helping determine a better course to avoid the weather.  Rain began to fall which brought with it concern for freezing rain, something that I choose to avoid at all costs.  My attention was intensely focused on the outside temperature reading which was quickly approaching the freezing point.  I couldn’t go any lower to find warmer air due to the mountainous terrain in the area.  Fortunately, my Cirrus Aircraft is equipped with a system called FIKI which stands for Flight into Known Icing.  This is a fantastic de-icing system that I’ve used on numerous occasions, yet I actively try to avoid icing encounters whenever possible.  I primed the system to ensure it was ready to go at the first sign of icing occurring on the airframe.  While I did pick up a small amount of icing over the course of the next hour, it was minimal and very manageable.  While this could be an unsettling experience to some pilots, I was still feeling confident with the journey.  I had plenty of TKS (de-icing) fluid on board that would last all the way to Seattle if necessary, I also had a Plan B.  Remember that waterway below I mentioned when writing about my journey towards Alaska?  That same waterway was now right below me.  Before leaving Seattle, in an abundance of caution, I subscribed to Jeppesen airplane charts for my multi-function display that covered all of North America, including Canada.  Despite altitude restrictions for mountainous terrain in the area, my Plan B, a worst-case scenario, was simply to descend down and fly the waterway back towards Vancouver and onward to Seattle.  Fortunately, my Cirrus performed like a rock star as always and allowed me to safely stay at altitude while I passed through the clouds and rain.

Upon arriving in Seattle, I was relieved to have completed my “Mini Flying Wild Alaska Adventure” successfully.  It concluded with a picture perfect landing at Boeing Field amidst the glow of the city lights surround the area.  While my time in Alaska was short, hence the “mini” in the post title, it was amazing.  It was truly amazing in every way, shape and form imaginable.

My Alaskan Flying Adventures will certainly continue, next time for a much more extensive visit when I venture back to there for more exploring this summer.  I’ve had a small taste of what it’s like to fly in the region and I absolutely love it.  The scenery, the beauty, and the views that constantly took my breath away, this is a place like no other.  It is truly the Final Frontier, and the place where I look forward to visiting many times in the future. 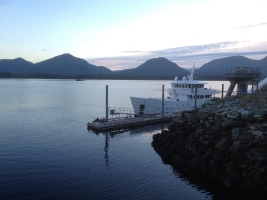 Thank you, Alaska.  You’re one of a kind with your natural beauty and perfection.   I’ll see you on my next Alaskan Adventure!